Web2Learn organised a hackathon for university students on citizen science

A hackathon for university students on various dimensions of citizen science was organised by Web2Learn for the INOS project in November 2020. The hackathon with the title “Put language learning to the service of a social purpose!” took place within DigiEduHack, which is a series of offline and online hackathons happening all around the world for two days, focusing on co-creating the future of education in the digital age.

Starting point of the hackathon

Citizens locally and globally are increasingly committing to social actions (climate change, anti-harassment, anti-corruption, etc). These actions can take many forms and are enhanced by digital technologies (social networks, sensors, open collaboration spaces, etc.). In these citizen-enhanced actions participants are highly motivated, self-organised and committed to the common goal; yet the potential is very little explored in the language education sector, where sometimes motivation to learn a foreign language may be missing. This hackathon served to offer solutions in the language education field by building on citizen science as a form of social participation.

Scope of the hackathon

The scope of the hackathon was to bridge language education (namely language learning and teaching) with citizen science as a form of social participation.

Students at Aristotle University of Thessaloniki were in target group B. The students belonged to two cohorts: those carrying out Bachelor studies at the School of French Language and Literature, and those carrying out a Master’s degree on the Interdepartmental postgraduate studies programme, “Languages, Communication and Management of Educational Services in a modern social, economic and technological environment”.

We used Slack for small group (4-5 person) collaboration; due to the exclusively remote modality we extended the duration of the hackathon to 7 days, from 10 to 17 November. Each group was expected to release a Solution (see next section). The winning team received vouchers of 50 euros for each team member for a Greek bookstore.

6 solutions (results of group work) have been submitted on time:

University students of the Department of Political Science of the University of the Peloponnese produced short texts in French based on offered resources on citizen science in French language. 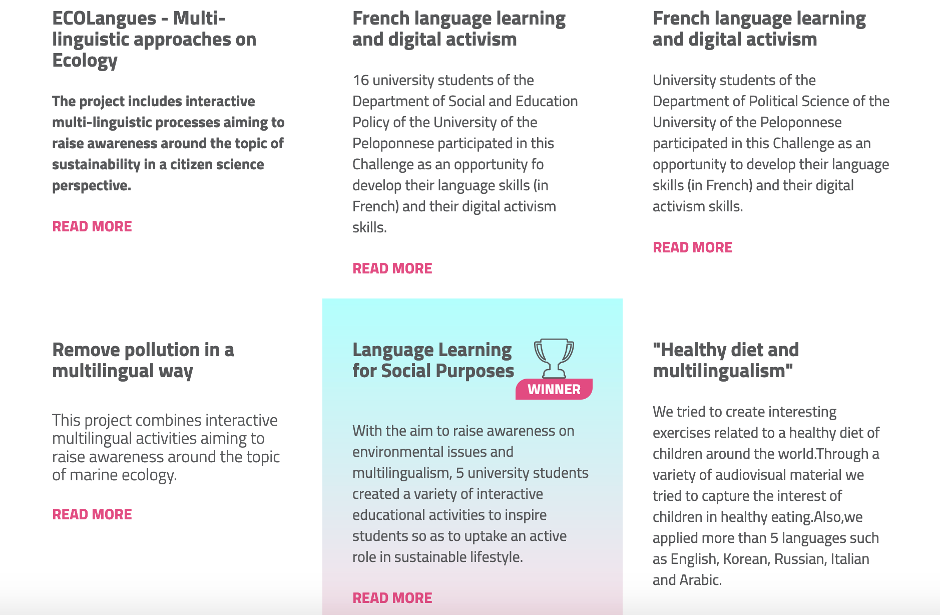