Sharing thoughts on the interrelation between citizen and open science, emerging from a study for the INOS project.

Between September and December 2019 I had the pleasure to lead a study entitled “Academia permeating society through citizen science: use cases of engagement in higher education”. This study is one of the outputs of the INOS project, and it will be made available by mid-February 2020 on the project website. My motivation for writing this post is to share some reflections on the topic of open science/citizen science, based also on publications I consulted for the preparation of the aforementioned study. The main reason behind this post was the apparent distinction between open science and citizen science and the implications of this distinction for science with and for society.

Let us start with an understanding of citizen science.

Citizens involved in the fabric of science

Participatory research, citizen science, public participation in scientific research (PPSR), community-based research, do-it-yourself (DIY) research: although each term is different, they all have public engagement in the production of scientific knowledge as a common denominator, entailing the process of democratization of science through participatory research (Vélot, 2016; Göbel, 2019). What is less clear though is who, except for the scientist-initiators, would or could benefit from the scientific results, under which conditions, and, more importantly, whether scientists are required or not to openly release the results to which citizens have co-contributed. In other words, despite the distinguished intentions of PPSR and closely related terms, the re-use potential of scientific outputs, as well as the need to bridge citizen science results with bigger and more ambitious scientific ventures, so that the outcomes of citizen science feed into the global picture of science, was unclear.

Several definitions of citizen science echo these noble aspirations. What is missing perhaps, is how they concur with “the Battle of Open” (Weller, 2014), understood as a collective effort to leverage an ethos of openness across subjects and disciplines and to contribute to the shaping of tomorrow’s science. This approach also relates to the question of belonging to the global knowledge commons and to the legacy of scientific work.

What scientific outcomes of citizen science?

Naturally, open science is not a panacea and there are still several open issues to tackle, documented in the literature. And of course, the discussion about the type of openness in a range of contexts, so that it retains its key benefits as an approach, should be dealt with consistently. But this shouldn’t mask the need to forge better relations between citizen science and open science, so that researchers, practitioners and policy makers become aware that CS “requires at least a basic degree of openness” (DITOs consortium, 2017). The figure below illustrates core concepts and areas of synergy between open science and citizen science according to Vohland & Göbel (2017); here accessibility of research results and processes is an example of where the two concepts coincide. 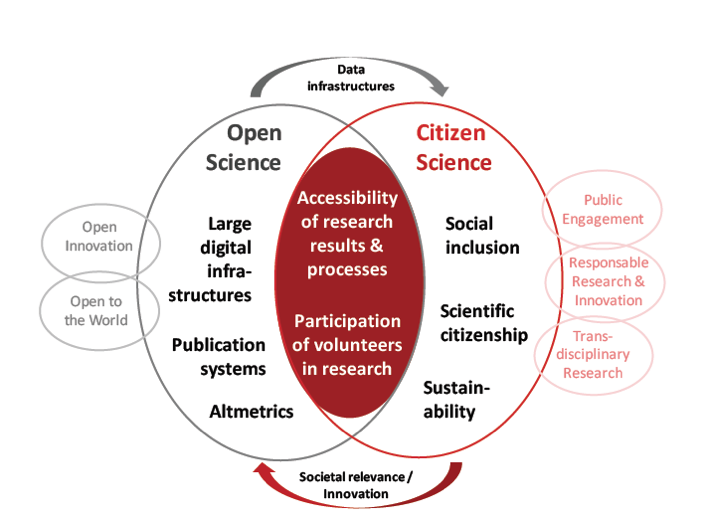 Losing its connection to open science would be detrimental to the whole citizen science effort, also in terms of definition and understanding of the term. The alternative term “citizen enhanced open science” could possibly make the link to open science more salient, even on name and definition levels.

If citizen science is to meet global goals for sustainable futures, such as the United Nations’ Sustainable Development Goals (SDGs), openness is a one-way road. Actions towards this direction include data standardisation (cf. De Pourcq & Ceccaroni, 2018; Geneva Declaration on Citizen Science Data and Metadata Standards, 2018) and alignment to Findable, Accessible, Interoperable and Re-usable (FAIR) data. An extra benefit from transparency and the sharing of processes and data generated by citizen science projects, would be the upscaling of citizens from (mere) data collectors to citizens shaping the future of science and society through the co-creation of scientific projects to meet current and future needs.